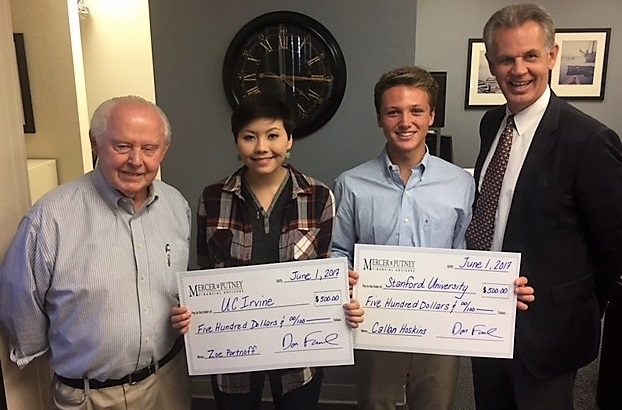 Mercer Putney Financial Advisors is proud to have awarded two deserving East Bay senior high school students $500 college scholarships.  The Walnut financial advisory firm posed the question “Is money the measure of success?” to all local, college-bound seniors. Out of the many entries received, two stood out among the best.

Zoe Portnoff of Campolindo High School, who will attend UC Irvine in the fall and plans to study Art History and Economics, discussed how her success is based on multiple factors such as achievement in academics, athletics, and emotional balance, too.  She reflected that “Money may be the measure of something, but it isn’t the measure of everything”.  Callan Hoskins of Miramonte High School who is attending Stanford next year, wrote “money does not measure success but can be used as a tool…. as it is a great enabler. “ His greatest successes, for instance climbing 7-Up Peak in the Trinity Alps or becoming an Eagle Scout, have meant the most in his life so far as he worked hard to achieve them but did not make money in these pursuits.

Don Faul, the Managing Partner of MPFA, awarded Portnoff and Hoskins with the $500 scholarships at their offices in Walnut Creek on June 1, 2017. All students who entered the competition received the book The Wealthy Barber by David Chilton to help in planning for their financial future.  Mercer Putney Financial Advisors has been a boutique financial advisory firm in the East Bay for over 30 years providing investments, retirement strategies, insurance, and overall financial planning and education.

Is Money the Measure of Success?

In American culture, money matters. America is the birthplace of consumer culture; a culture that postulates that the more material goods one has, the happier one is. Money can reflect a certain kind of success; often, financial success stands as a testament to an individual’s hard work, intelligence, and skill. Monetary success is often highly emphasized in a culture fixated on the rags-to-riches American Dream. Magazines count off the richest people in the world, reality television shows follow the lifestyles of extravagantly rich families, and expensive items of clothes or accessories are often worn as status symbols as much as fashion statements. However, in reality, success is defined by much more that the amount of money in someone’s bank account. Economic success is only one aspect of a happy, well-rounded, and healthy life.

Success is gained through accomplishments in many different spheres, not just that of economics. As a student, cash isn’t king- academic success is. I love exploring new concepts in my classes, and strive for good grades that reflect my passion for learning. At this point in my life, success is defined by my ability to juggle extracurricular activities with my eight classes, studying for an Art History exam one moment and preparing to lead an Academic Decathlon club meeting the next. The accomplishments I’m most proud of aren’t checks in the bank or high-paying jobs; they’re trophies from academic competitions, high scores on difficult tests, and, of course, getting into college. Although I won’t be in school forever, my ability to learn and engage in educational activities will always be a part of how I measure my personal success.

This year, I’ve been working towards another kind of success- emotional balance. In high school, it’s easy to become overwhelmed by the multitude of assignments and activities that quickly leave students stressed and sleep-deprived. I’ve realized that even more important than academic or monetary success is my ability to maintain my mental health. Over the summer, I learned breathing exercises and meditation techniques that help me to stay calm and in control of my emotions. Economic success focuses on the material and ignores something much more is significant: the condition of the human mind. While I recognize that economic stability is important, I believe my own happiness and mental state isn’t simply defined by how much money I have

There are thousands of different ways to quantify success. In truth, everyone has different values and thus we all view success in different and unique ways. Choosing only one factor to measure success ignores the fascinating complexity of human life and the human mind. Given our personal definitions of success, a man without a penny to his name could be just as successful as a billionaire! Money may be the measure of something, but it isn’t the measure of everything.

Is Money the Measure of Success?

When I summited 7-Up Peak in the Trinity Alps Wilderness with my father, the views were unimaginable; reaching slivers of snow stretched down the mountain, and gnarled wooden tentacles clutched at the sky. I remember the rocks--the look of their purple freckles, and the satisfying click they made when they rolled down the mountain. I can recall every second of that morning ascent in minute detail, especially the feeling of pride in having achieved my goal.  Notably missing from the experience, however, was any thought of money.  Granted, there had been cash flow leading up to that moment: transportation, meals, gear, and myriad other expenses. All had a dollar amount attached to them. But now, at the peak of the mountain, the cost was no longer an issue; money wasn’t a measure of anything that mattered.

Frankly, money is not the measure of success. When I think of the greatest accomplishments in my life, most of them don’t involve acquiring money. I didn’t receive money when I became an Eagle Scout when I was named of the swim team, when I was accepted to Stanford, or, of course, when I summited 7-Up. Personal success is measured in one’s own regard, and I feel most successful when I achieve something I have worked my hardest for--something that makes me proud.

Yet, if money isn’t the measure of success, then it begs the question: what does money measure? The answer is simple; money measures the value that others put on a person or what a person produces. Often, success and money overlap, and someone who is successful usually does have a lot of money. However, if I’ve learned anything from statistics classes, it’s that correlation does not imply causation. In other words, having money doesn’t imply success, for the simple reason that monetary gain is determined by the value that others, not one’s self, places on an achievement or ability. A person can be successful when their work isn’t appreciated by others enough to earn them money, as long as they are proud of what they’ve done.

is best used as a tool, not a measurement. It allows us to pursue those activities that make us feel successful. Many people are satisfied when they help others through charity or simple acts of kindness, which can often be most effective when augmented by money. Other people are satisfied when they can leave their progeny an inheritance, or when they can bring their family on a vacation--a success that is measured by one’s family bonds but aided by money.

Money is the great enabler. Though money itself is not a measure of success, it often helps unearth success by allowing us to take advantage of amazing opportunities; I’ve been lucky enough to have a family that could afford me climb 7-Up, attend Boy Scout trips, join a swim club, and a family holiday. I have found great satisfaction in these pursuits, and in this money has aided but not measured my success.